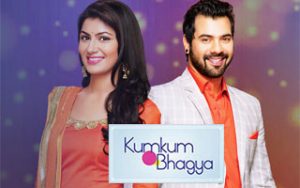 TV’s numero uno show Kumkum Bhagya has been ruling audiences’ hearts and receiving an overwhelming response to its interesting plot and affable characters. Produced by TV Czarina Ekta Kapoor and featuring actors Shabbir Ahluwalia and Sriti Jha in lead roles, this immensely popular Zee TV primetime drama explores various facets of emotions, relationships and has been achieving roaring success on the ratings charts since its launch. The show’s starkly contrasting lead characters- the flamboyant rockstar Abhi (Shabbir Ahluwalia) and the prim and proper, bespectacled girl-next -door Pragya (Sriti Jha) have, over the past 3 years, emerged as one of Indian television’s most loved and iconic couples. Touching unparalleled highs in the course of its glorious journey, Kumkum Bhagya has now reached the 1000 episodes mark, with major celebrations for viewers of Zee TV on 15th January.

To commemorate the celebrations for Kumkum Bhagya’s 1000-episode milestone, Zee TV has curated a vibrant catchy anthem that is that is fast catching eyeballs and growing in popularity since it went on air on 1st January.

Zee TV’s popular characters Naren (Akshay Mhatre), Pooja (Sheen Dass), Devi (Yesha Rughani), Adhiraj (Krrip Kapur Suri), Nisha (Manasi Salvi), Jia (Disha Parmar), Aditya (Ssudeep Sahir), Prem (Pranav Misshra), Tejaswini (Jyoti Sharma), Rishabh (Manit Joura), Shrishti (Anjum Fakih) and Preeta (Shraddha Arya) feature alongside Abhi-Pragya in this anthem, shaking a leg to the tunes of an original track ‘Meherbano’. The anthem showcases all of Zee TV’s actors thanking their ardent fans for their unflinching love and support. At the shoot of the anthem, a magnificent cake was rolled out to sweeten the festivities. And in the absence of a knife to cut the cake, Shabbir and Sriti were quick to use their own fingers to cut the cake and share a fun-filled moment with the entire Zee TV family!

In what was a truly unforgettable celebration of Kumkum Bhagya’s milestone, Zee TV aired a 4-hour special marathon episode on 15th January starting at 6:30pm with all of Zee TV’s lead protagonists coming together to be a part of Rockstar Abhi’s concert. While Piyaa Albela leads Akshay Mhatre-Sheen Dass and Zindagi ki Mehek stars Sameeksha Jaiswal-Karan Vohra presented a romantic act to express their love for their partners, there was a girls versus boys dance off between the likes of Sonia Balani, Jyoti Sharma, Pranav Mishra and Manit Joura.

Speaking about the show’s achievements, Zee TV’s Deputy Business Head, Deepak Rajadhyaksha said, “Kumkum Bhagya has moved beyond the confines of a TV show to become an integral part of our viewers’ lives. Over the past couple of years, Abhi, Pragya and their undeniable chemistry has appealed to viewer sensibilities, making the show the undisputed leader of the Hindi television space. People care to know what lies in store for Abhi-Pragya just as they would check on their loved ones. Zee TV has always believed in presenting stories and characters that not only entertain but are relatable and inspiring. We are glad that we have been able to make Kumkum Bhagya a wholesome family entertainer with Abhi and Pragya emerging as India’s most sought-after dinner-table companions. We would like to thank Balaji Telefilms and Ekta Kapoor for their dedication in driving the show, and hope that, together, we scale new heights and attain many such milestones.”

Zee TV Africa pulled out all the stops at the annual DISCOP Johannesburg held last week. DISCOP, which has become the world’s number one destination to acquire and co-produce content “Made in Africa” and sell international film, television and digital content, adaptation rights and packaged TV channels into Sub-Saharan Africa 1,000+ acquisition, development and production.

With a local dance Troupe activation and the colourful stand at DISCOP, visitors were drawn to the Zee TV exhibition.

Since 2014 it has become the platform for channel unveilings and exciting new content launches. Four ZEE channels unveiled at the exhibition have since been added to the stable, among them Zee World, Zee Magic, Zee Bollymovies and Zee Bollynova.

Aiming to increase its presence in Africa, ZEE announced that Africa would have a further addition to the stable of channels showcasing Bollywood content, Zee Mundo for the Portuguese speaking territories in 2018.

Zee Magic, launched in October 2015 DISCOP, is a General Entertainment channel dubbed in French which brings the best of Bollywood series and food shows to Francophone Africa, while Zee Cinema is a 24-hour Hindi Bollywood Movie channel catering to South Asians on the continent.

Africa certainly has a front row seat to watch the best of content – Bollywood movies, television series and food shows – that ZEE has to offer!

Bollywood is not just about the rich and the famous, glitter or glam! ‘Behind-the-scenes’ run a parallel story that often doesn’t meet the eye and unfolding one such tale is &TV’s newest fiction offering Siddhivinayak. A passionate hate story, Siddhivinayak is set against the backdrop of Bollywood starring an upcoming actor, Vinayak Kundra (Nitin Goswami), and a junior dancer, Siddhi Joshi (Neha Saxena). The only thing common between Siddhi and Vinayak is their mutual feeling of hatred. This hatred will give rise to rebels; this hatred will distance both siddhi and Vinayak… but can hatred define the destiny of these two individuals? Watch Siddhivinayak light up your screen starting 26th October, every Monday to Friday at 9:00 PM on &TV.

Produced by Studio B & M, Siddhivinayak captures the essence of every emotion be it – hatred, drama, power or love with an extremely impactful narrative. The hero of this story is the son of a famous Bollywood producer and doesn’t think twice before flaunting it – Vinayak, a.k.a Vin Kundra whilst the heroine is a junior dancer in a troupe that performs in films – Siddhi Joshi, a.k.a Siddhu. Working together is a part of their profession, but hating each other with a vengeance has become their passion! It is hatred that will get them closer to each other only to set them apart. “Laati Hai Paas Door Jaane Ke Liye, Nafrat Hi Hai Bani In Deewano Ke Liye…”

Speaking about the show, Rajesh Iyer, Business Head, &TV said, “Love stories have always excited Indian audiences and is integral to a GEC’s content play. Given the demand for such narratives, we thought of presenting a contemporary amalgamation of Bollywood and romance to the viewers with our latest offering Siddhivinayak, a passionate hate story. Bollywood and the life of stars have always raised curiosity and the story of Siddhi and Vinayak, packed with passion, hate, drama and romance, will provide an exciting journey of a Film star and his tryst with a junior dancer.”

Commenting on portraying Vinayak’s character, Nitin Goswami said, “Its intriguing to play the role of a superstar and live every man’s dream through Siddhivinayak. The experience has been amazing so far. The way Vin balances his stardom and arrogance is something audiences will love to watch. Siddhivinayak is unlike anything I have ever seen on television and I am really excited to be a part of such an outstanding storyline.”

Adding further, Neha Saxena essaying the role of Siddhi Joshi said, “Siddhi’s character is that of an ideal daughter which every family desires. The fact that she is the bread earner of the family never stops her from chasing her dreams as a dancer. The strong narrative of the show adds to the character of Siddhi, and viewers at every step will come across an interesting character trait. I am coming back with a bang and hope the viewers will enjoy and support my new journey.”

Witness the Passionate Hate story of Siddhi and Vinayak unfold starting 26th October, every Monday to Friday at 9:00PM on &TV

Zee Mundo, the TV channel dedicated exclusively to Bollywood productions, features the online streaming of the blockbuster movie Tanu and Manu Get Married 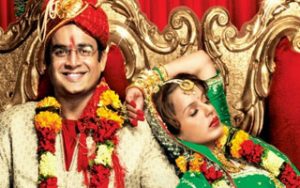 From September 29 through October 1st, Hispanic audiences will be able to enjoy the exclusive online streaming of one of Bollywood’s blockbuster films, “Tanu y Manu se Casan” (Tanu Weds Manu).  ZEE Mundo, the TV channel dedicated to Bollywood movies, invites the audience to watch the film online from any mobile device for free at www.zeemundo.com. Viewers will also have the chance to share their opinions and interact during the movie.

Manu Sharma is a young man who returns from London to India to find a girlfriend to fulfill his parents’ wishes. Life has other plans when he falls in love with Tanu Trivedi, a free-spirited girl who has no plans of getting married. This is a story about family unity, values, and the traditions surrounding Indian weddings, featuring animated choreographies and colourful sceneries, iconic of Bollywood productions. The movie will be available from September 29 through October 1st, at the site: www.zeemundo.com. After the movie, the channel invites you to meet its director, choreographers, and main characters in an exclusive behind the scenes presentation.

The Hispanic audience is discovering the grandiose productions stemming from India given the unrivalled niche ZEE Mundo offers by bringing Bollywood programming in HD and Spanish. Starting on September 29th, audiences will be able to enjoy one of India’s biggest blockbusters online by visiting www.zeemundo.com.